I love “Tearaway Unfolded” for PS4!

I haven’t been able to stop playing “Tearaway Unfolded” since I downloaded it from the PlayStation Network. It’s free this month for PS-Plus members.

At first glance, I thought this game was going to be a pretentious hipster-game, and with the term “crafting” put in a lot of big titles these days, I thought I would take a pass. Thankfully, it’s definitely not that and so much more!

My “messenger” whose gone through many changes. You can customize virtually any feature they have using the presets, or draw your own!

It’s a platforming adventure game, where the entire world is made of construction paper folded and shaped into familiar things. The basis is that a hole has torn into the sky and ‘scraps’ have invaded infecting the world with dull newsprint. You play as ‘the messenger’ who is controlled by ‘YOU’, and you use your light to fix the world, make tribal people happy, and hypnotize and defeat scraps with the shine of your light.

Along the way you will meet characters what want things added to them, like a crown, moustache, or symbol to display. 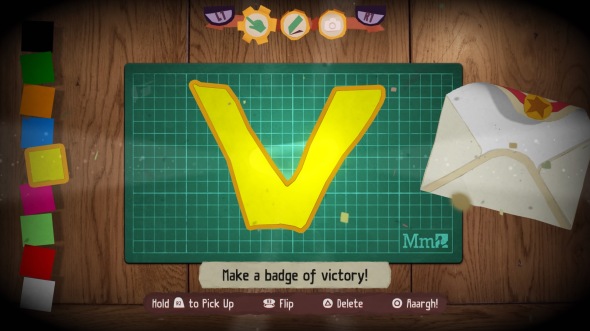 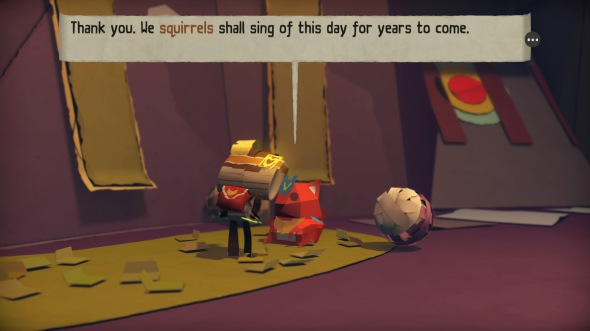 …then I placed it on the Warrior Princess Squirrel’s helm.

You can take photos at anytime with your familiar selection of filters that you would see on any smartphone app. You can even do animated gifs.

Not to mention, you can use the PlayStation app on your phone as a second screen of sorts, take pictures from it, and it will upload to the game and texture the environment with that photo! This is great if you got a friend with you who will mess around with it as you play the game.

This is just the creative stuff!!!

The game-play alone is really fun, with stages that are game mechanic focused the more skills you learn. Some combine these skills with some neat results, or even just leave it open to you to decide how to approach it.

Also the use of the touch-pad on the PS4 controller has been implemented so well, I think this is the only game that ACTUALLY USES IT outside of just pressing the touch-pad button (at least in any other game I’ve played so far). It’s the primary button where in this game you draw, swipe, press, and flick. So good. So fun.

I don’t see anything wrong in this game that no player would like. You have be a person with no imagination, and a real square to not enjoy this game at all. I haven’t finished the game yet, but I recommend it to any PS4 player.

Is this a review? It is now. 5 cowboy hats out of 5 cowboy hats. Now I’m gonna go and draw a cowboy hat and put it on my messenger…

This entry was posted on March 12, 2017 by Radutron. It was filed under Art, Photography, thoughts, Uncategorized, Video Games and was tagged with ps4, review, Tearaway.