Guardians of the Galaxy is one of my favourite movies of this generation for many reasons. Among those reasons is the fantastic soundtrack. The cinematic music is fine for the action, but it’s Starlord’s “Awesome Mix Vol.1” that puts new context into classic tunes for me that I couldn’t appreciate as a teenager.

Listening to my local classic hit radio station has had my imagination anticipate what the movie’s sequel could include in Starlord’s “Awesome Mix Vol.2”. So, I decided to share some of my picks.

Boston – More Than A Feeling

I can’t think of a better song to reminisce about listening to Awesome Mix Vol.1

I picture this track being in an RNR-type of situation with the Guardians. Or even a return of morale to the team.

ABBA – Knowing Me, Knowing You

Starlord wallows in despair in front of a twin-sunset as some relationship, with maybe a teammate, falls through for a time.

Floating in space either alone, or in his ship, The Marion, which has run out of fuel and they’re waiting on help from, perhaps Nova Core.

Montage of the Guardians hunting down Nebula, or even Thanos.

The Ronettes – Be My Baby

Starlord and Gamora have a chance to dance with each other, which probably ends with Starlord’s ego ruining it.

Bill Landford & The Landfordaires – Run On For A Long Time

Can be used similar to Red Rider’s song, but I picture this being the last track in the movie when The Marion takes off to hunt down Thanos.

Harry Chapin – Cat’s In The Cradle

A great track that can be used similar to the ABBA track, but since Starlord never knew his father, applies better here.

Now, the music in the first movie didn’t necessarily match what was happening on screen, but I believe the tunes can definitely touch on themes relating to Starlord’s character.

Even if none of these tracks make it to Guardians Of The Galaxy Vol.2, I’m sure Starlord’s new mix will be pleasant to our ears.

“Some Kind Of Wonderful” (by, I think, Grand Funk Railroad) would be a great song as well. Maybe an Annie Lennox track. 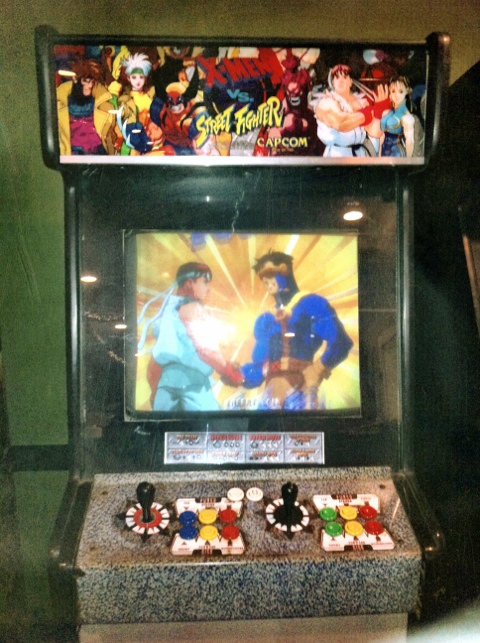 I’m in my g/f’s hometown visiting family, and we were having supper at the local pool hall, and what do I see? The first crossover fighting game I’ve ever played in an arcade. X-Men Vs. Street Fighter!

An arcade. Remember those? My generation (born before 1990, I guess) and earlier, know what I’m talking about. Those were the real life multi-player gaming scenes.

I remember when I was 10, taking on some older guy at Ultimate Mortal Kombat 3. I was Sektor, and he was Mileena. We were matching wits with our teleport punches and kicks. We were doing “best out of 3”. On the 3rd match, and being a naive kid, I let my opponent “try something out” (insert trollface here) on the VS screen by inputting a code to make the match interesting. He screwed me by making my life bar start at HALF. His friends were high-fivin’ each other, while my best bud and I felt cheated.

What an asshole. Ah well. It’s cool though to MEET your opponent face to face, and show them your skills without the veil of the Internet.

I’m not into online multi-player games really. Only when I’m playing with friends now and again.

Though, nothing will beat that feeling of walking into a huge room surrounded by machines that eat your quarters (and sometimes, dollars!), and being entertained for hours on end. Remember “Lucky And Wild”? One of my favs. 2 player co-op!

Now I’m sounding like one of those geezers that talk about the good ol’ days. 😛