I gotta tell ya folks…

I can’t pretend anymore.
Due to the messages, and comments I’ve been getting about The Rabid Whole either playing shows or doing things in Toronto or beyond, I have to say that TRW is currently defunct.

Since it’s ultimately Andreas’ baby, it’s his choice to continue or not.

You can probably guess why. Being in a band is expensive, and being in an ambitious band like TRW can be very expensive. I’m not here to whine, but there’s a line you eventually have to draw when things aren’t working out the way one would expect.

As for myself, I’m still in Toronto with my lovely woman, and shall be spending the next year or two paying off the debt I’ve accumulated during the last 4 years in TRW.

If TRW does continue, it shall do it with out me.

Do not take that last sentence as if I have any regret being in the band for the last 9.5 years (fun fact: “Selfish Nature” was written in 2005). There once was a time when I was happy, and somewhere along the line that happiness turned into emotionally withdrawn towards my bandmates, personality clashes, and absolute anger during certain conversations.

I’m nothing but thankful for the experiences I’ve had. The tours with Dope Stars, Bile, and Cyanotic in the U.S./Canada; attending two Cold Waves festivals, and performing in one; opening for Hanzel Und Gretyl in Edmonton; Playing with 16Volt at a couple of shows; and meeting/touring with Left Spine Down (which kickstarted the association with industrial music TRW would have). Being a fan of KMFDM since 1995, and getting right into the whole genre since high school, to then achieving the above listed, is such a great feeling.

I also can’t forget the many floors, couches, and sometimes beds I’d be able to sleep on, and the meals cooked for us, thanks to the hospitality of people we’d meet! You know who you are. If there’s hope for the human race, as a weary traveller, you’ll find it on the road!

I’m not finished with music as I have a need to create, and have a notebook that I’m filling up with ideas. I’m looking forward to recording music about “The Things I Like”. 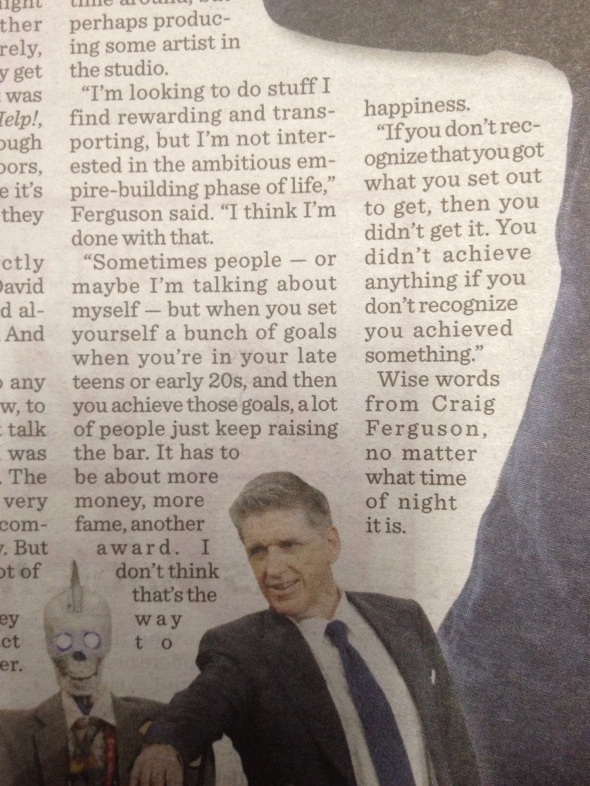 Here’s to the future.

These pictures were taken during the first leg of the “Built To Fuck, Born To Tour”, ending at COLD WAVES II. The Rabid Whole providing direct support for BILE, back in September 2013. It was a very memorable time, especially in Chicago. I got to meet some new people, and get some of my friends in on this. I thought I’d post these on here instead on leaving them on facebook, hoping they’d reach a wider audience. -G

Krztoff from BILE — This is when I first had the idea to get this theme going. I realized the potential of other musicians I’d meet along the way. He. Was. Hammered. http://bilenyc.net/

Brendin from Sagan/Armor/BILE — Brendin probably showed the most attitude of this group of pictures. He has a weird sense of humour, but by the end of the tour I had made a decent imitation of him. I thought of stealing this chair for the rest of the tour, for other people to sit in, but I realized that the damn trailer was already packed. http://www.facebook.com/BrendinRossOfficial

Rainbow from The Birthday Massacre — At our Toronto show, Rainbow showed up, so I just HAD to ask him to have a seat, and flip me off. http://www.thebirthdaymassacre.com/

Reece from All But Over — We had a day off in our home-base of Toronto. I chose to work at my day job, and got my boss (who is also a great singer) to participate. http://www.allbutover.com/

Avi and Matt from ART vs. INDUSTRY — We stayed at Matt and his lady’s place in NJ, and Avi flew in to check out our show in PA (or was it DE?). Super cool guys, and their music kicks dick. http://artversusindustry.bandcamp.com/

R.H. Bear from BILE — Sitting at a McDicks, in Chicago. Bear was super cool, and told some crazy ass stories throughout the tour. But I’m sure the tatts from head to toe could tell a whole lot more! http://www.bilenyc.net

Chalsey Noelle from The Rabid Whole — I didn’t want my band members to be in this gallery, ’cause I thought that’d be pretty close to putting myself in the gallery. Right after I took Bear’s picture, Chals asked “I wanna be in it!!!” Fine, Chals, you get to give the biggest middle finger of them all! http://www.therabidwhole.com

Eric Powell from 16Volt — In the dressing room at Cold Waves II at the Metro, in Chicago. Eric may look like a bagel-loving biker, but beyond the “I don’t give a fuck”-vibe from this photo, he’s a nice guy! http://16volt.com

Burton C. Bell from FEAR FACTORY — He is my fav singer of all time. He stopped by Cold Waves II to participate in the festivities, and sing on-stage with some of the acts! When I asked him for a favor, he seemed hesitant, but knowing it was showing me his middle-finger salute, he didn’t seem to mind. http://fearfactory.com/

Chris Connelly from Revolting Cocks/Ministry…the list goes on! — Mr. Connelly was sitting right beside our, and Bile’s merch booth, selling some of his stuff too. Paul Barker walked in to talk to him about something, but after he left, I was too chicken-shit to stop him for a pic. Chris, however, obliged. Fucking awesome! http://chrisconnelly.com/

Mark Durante from The Waco Brothers/KMFDM — I passed by Mark in the hallway, and he said something (I forget), then said “Don’t listen to me, I’m a crazy old man!” The stupid thing was I didn’t recognize him right away. It was in the dressing room when Oscar (from my band) mentioned it to me, that he used to be in KMFDM, that I just had to contain myself. We sat down with him and heard his brief story being in KMFDM, and got this pic (which is probably my favourite). The shirt just goes with it! http://durantula.com/

Zoog Von Rock from ANGELSPIT — I’m pretty sure Zoog snuck his way into Cold Waves II. I was happy to see him. He’s an eccentric guy, and makes me laugh. Truely a man’s artist. If you’re ever at his place, ask him about the Tennessee Moonshine. He offered me water, and gave me that! http://www.angelspit.net/

Brian from The Gothsicles — He was taggin’ along with Zoog. Nice guy! I wasn’t familiar with The Gothsicles (even though I heard the name a few times. DUDE! Eggplant wizard from KID ICARUS!), but I really liked his participation in my little gallery. The last one I got…or will it be? http://www.thegothsicles.com/ 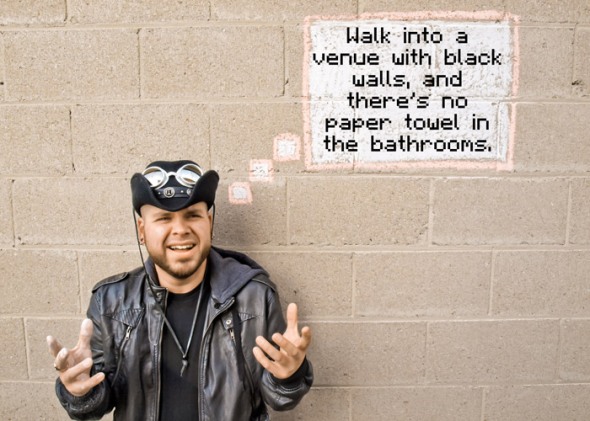